I am again grouping links into Featured, Links and Breadcrumbs. It definitely allows people to filter a bit and take in parts of the newsletter on their own pace. I got some good feedback on the new layout. 👍

This week our family celebrated Tammy's birthday! 🎂 Amongst her various gifts, we got her a HomePod. The HomePod is really nicely designed. The audio quality is truly impressive. Setup was ridiculously easy with the iPhone just detecting it and setting it up in a couple taps. The kids however keep yelling "Alexa!" at it and wondering why it isn't answering. 🙄

Don't miss these gems from the past week.

Jaron Lanier Interview on What Went Wrong With the Internet
nymag.com

I think it would be amazing to have dinner with Jaron Lanier. He is incredibly articulate and has thought deeply about how technology impacts our social lives. In this interview Lanier reflects on Silicon Valley and "Big Tech", specifically hitting on the social platforms. He points directly at the economic model of ad driven platforms as the cause for much of the problems of social media.

And there’s only one way to merge the two things, which is what we call the advertising model, where everything’s free but you pay for it by selling ads. But then because the technology gets better and better, the computers get bigger and cheaper, there’s more and more data — what started out as advertising morphed into continuous behavior modification on a mass basis, with everyone under surveillance by their devices and receiving calculated stimulus to modify them.

Because as long as you have advertising, you have this perverse incentive to make it manipulative. You can’t have a behavior-modification machine with advertisers and have anything ethical; it’s not possible. You could get away with it barely with television because television wasn’t as effective at modifying people. But this, there’s no ethical way to have advertising.

Lanier's position on social media is intense, and thought provoking.

It suggests that you’re just a cog in a giant global brain or something like that. The rhetoric from the companies is often about AI, that what they’re really doing — like YouTube’s parent company, Google, says what they really are is building the giant global brain that’ll inherit the earth and they’ll upload you to that brain and then you won’t have to die. It’s very, very religious in the rhetoric. And so it’s turning into this new religion, and it’s a religion that doesn’t care about you. It’s a religion that’s completely lacking in empathy or any kind of personal acknowledgment. And it’s a bad religion. It’s a nerdy, empty, sterile, ugly, useless religion that’s based on false ideas. And I think that of all of the things, that’s the worst thing about it.

A worthwhile and thought provoking read.

I do have to agree with this argument.

In short, encryption is viable for the public at scale precisely because Apple controls everything: clients on both ends, and the server in the middle. It’s the same story with WhatsApp or any of the other encrypted messaging services: being closed makes end-to-end encryption actually usable at scale.

Nobody has successfully implemented solid encryption with an open standard.

By the way, I don't use Google or Facebook products and I have a very vibrant engagement with the web and other people. These solutions are optional.

Google, of course, knows one’s every search, for many people their every email, and thanks to the company’s ad network, control of Chrome and Google analytics, and, of course Android, pretty much everything else one does online. Facebook’s knowledge is slightly less broad but arguably deeper: your friends, your interests — both stated and revealed — and thanks to its ‘Like’ button, your web activity as well.

I hadn't considered this last point.

Specifically, if an emphasis on privacy and the non-leakage of data is a priority, it follows that the platforms that already exist will be increasingly entrenched. And, if those platforms will be increasingly entrenched, then the more valuable might regulation be that ensures an equal playing field on top of those platforms. The reality is that an emphasis on privacy will only increase the walls on those gardens; it may be fruitful to rule out the possibility of unfair expansion.

Essentially those that hoarded as much data as possible early on gain a permanent advantage. Yuck. 🤮

I have long advocated that you need to be very conscientious of the applications that you put on your phone. Those applications are with you all the time. Be mindful of that.

Smart phones are useful, but they are also incredibly addictive, and that addiction is at the epicenter of Silicon Valley’s effort to grab an ever increasing percentage of our minds. In that a substance or behavior controls us, it becomes our master, and that just won’t do.

I like many of the recommendations made in this article.

My favorite picture from the last week. 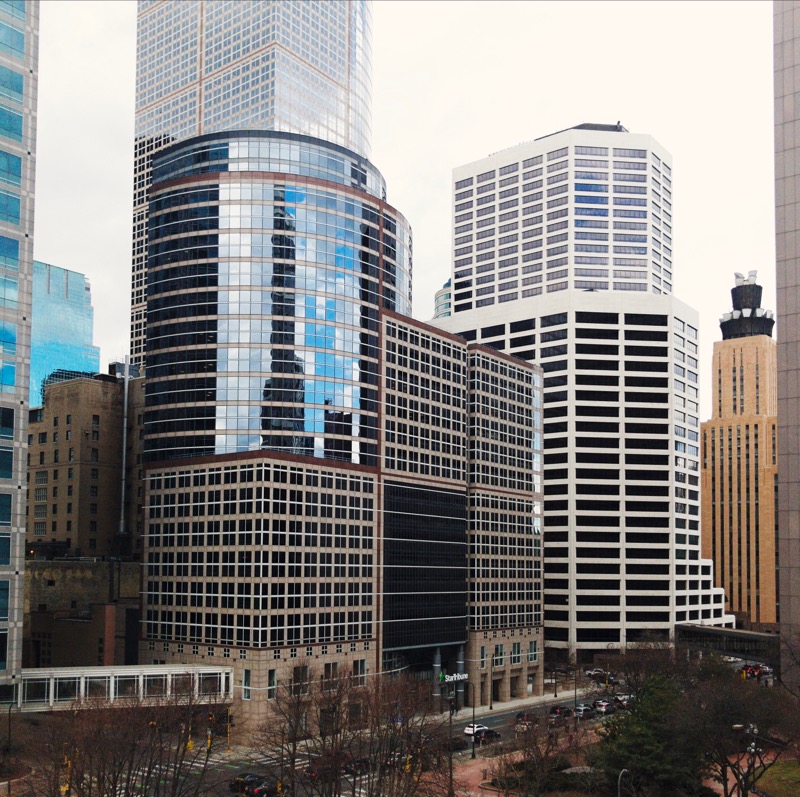 Downtown Minneapolis finally done with the snow and preparing for spring.

Commentary on interesting links from the week.

Many of the snap on lenses for iPhones are cheap and make your photos look worse. I've heard very good things about these from multiple people. I haven't bought them, but if I did get snap on lenses for my phone these are the ones I would get. 📸

I've always used a 6-digit PIN (once that option came out), but this article made me consider that with TouchID I now don't need to use my PIN nearly as much, and the added security of an alphanumeric passcode is worth the trouble. I've switched all my devices to use a strong password now. 🔐

1Blocker is my preferred way of managing my privacy and protecting myself while browsing the web. This new version is a solid upgrade.

I love to see micro.blog getting more coverage as a viable option for easy publishing online.

I can see the potential for this type of benefit.

I find the practice of long-form journaling helps my brain to organise itself and tell me how it really feels! … My journal is where I get the chance to sit down with my brain and let it talk to me, to write/type whatever I”m feeling at the time.

I've never stuck a journaling habit, but it’s one I'd like to build at some point.

A manifesto for how technology teams should operate.

A plain-text markdown option for diagrams and flowcharts. This seems to miss the ethos of markdown also being readable as plaintext, but interesting to peek at.

Why I love editing video on iPad — and how it could still be a lot better — iMore
www.imore.com

Some interesting options for more advanced video editing tools on the iPad.

This is great. Always focus on improvement. Get a little better everyday, and magic happens. 👍

We updated our pick for the best RSS app for iPhone and iPad —The Sweet Setup
thesweetsetup.com

Unread paired with Feedbin is my RSS feed solution of choice.

This is one of Tyler and my favorite games for the Wii U, and I’m pretty excited to see that the Switch version will support cooperative play. That is a great add for kids and parents or siblings to play together with.

Additional links of interest from this week.

WikiTribune is a news platform that brings journalists and a community of volunteers together. WikiTribune just got funded and I became a backer. I've been impressed with Wikipedia and am excited about Jimmy Wales and team focusing on the news ecosystem. I am very curious to see how they realize these objectives. I've previously thought about how news can be reinvented. I focused more on the open source model instead of wiki, but either way I feel like a fundamental rethink is possible! Let's see how they tackle this. Become a supporter today!

These are my small updates shared on my microblog last week.

Kids are all of a sudden into Beanie Boos. 🤷🏼‍♂️ The bishops on the “summer” side of our custom Chess set are Kubb players, of course. This time of year is great for eagle watching as the ice comes off Cannon Lake. This morning we watched a Bald Eagle and Golden Eagle both perched just a few feet away in the same tree.

Got great tickets to the two shows I wanted to see at the Music in the Zoo this summer — Son Volt and Michael Franti & Spearhead. 👍

Well deserved praise for my new favorite restaurant! Martina wows diners with flavors of Argentina and Italy in south Minneapolis.