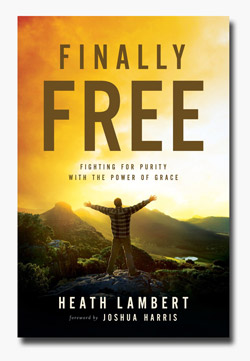 “The Internet is the crack cocaine of pornography,” says Heath Lambert, author of the forthcoming book, Finally Free: Fighting for Purity with the Power of Grace. Lambert is assistant professor of biblical counseling at Boyce College and teaches at Southern Baptist Theological Seminary, Louisville, Kentucky. We asked him about the growing epidemic of pornography in the lives of Christians, and about the roots behind the sin.

The sin of pornography is directly linked to the sin of pride, he says.

“Men who want to overcome the problem of pornography,” says Lambert, “have to learn to worship at the feet of Jesus and have to, by grace, learn how to be fascinated and captivated by the beauty and the glory of who Jesus is, and what he has done for sinners.”

To listen to our full 22-minute conversation, subscribe to the Authors on the Line podcast in iTunes here. Download the mp3 here (14.9 MB). Or listen from the resource page through the following link:

Previous Authors on the Line podcasts —

Who Is P.G. Wodehouse, and Why Should It Matter to Us?

On one level, reading the works of P.G. Wodehouse provides its own justification — provided you are looking to justify the reading of light comedy at the beach. But who actually needs to justify that kind of thing? To consume a literary soufflé brings its own reward, and no heavy, sick feeling afterwards. Tangled plots, no sex or violence, memorable characters, hilarious dialogue . . . what could be better? There is some sin present, to be sure, but it mostly involves the pinching of cow creamers at English country estates, blackmail of scoundrels, not to mention high levels of deception to get out of difficulties with troublesome aunts.

Pelham (Plum) Grenville Wodehouse began writing in the early twentieth century, and continued writing down to his death in 1975. He was widely acclaimed as a stylist on both sides of the Atlantic, and not by slouches either. Rudyard Kipling once said that “Lord Emsworth and the Girlfriend” was the best short story in English literature. A native Englishman, Plum moved to the United States after the Second World War, becoming a citizen here in 1955. He was knighted by Queen Elizabeth in 1975, just a few weeks before his death.

So Wodehouse really is an enjoyable read. But how could pursuit of Wodehouse ever be a serious task? I would suggest that anyone who wants to be a serious writer needs to be thoroughly acquainted with Wodehouse, and for two basic reasons.

First, Wodehouse knew how to describe, in painfully accurate ways, the foibles of those who wanted to be serious writers. Reading Wodehouse can help keep you from wanting to be the wrong kind of serious writer, by which I mean a poet who might write something like The Pale Parabola of Joy, and who might have allowed himself to be named something like Ralston McTodd. Wodehouse was merciless to pretentiousness, and aspiring writers are the most pretentious fellows on the planet. So there’s that spiritual benefit.

The Black Belt of Metaphor

But the second reason is why I have for years been devoting myself to an ongoing and consistent reading of Wodehouse — meaning that I am always reading something by him, all the time. Simply put, Wodehouse is a black belt metaphor ninja. Evelyn Waugh, himself a great writer, once said that Wodehouse was capable of two or three striking metaphors per page. He looked like a sheep with a secret sorrow. One young man was a great dancer, one who never let his left hip know what his right hip was doing. She had just enough brains to make a jaybird fly crooked. Her face was shining like the seat of a bus driver’s trousers. He had the look of one who had drunk the cup of life and found a dead beetle at the bottom.

The metaphors are consistently laugh-out-loud funny, but they are more than that. They are arresting. They are memorable. They connect things that are not usually connected. They show wordsmiths how wordsmithing should be done. Aristotle once said that the ability to use metaphor was a mark of genius, and if this is correct, as I believe it is, then Wodehouse has a lot to teach anyone who works with words. We learn by imitation, and when it comes to striking similes and metaphors, Wodehouse is worthy of imitation. But to imitate, we must read.

So exposure to Wodehouse can show us how. We need to look elsewhere for the why. Ultimately, I believe that Christians should love metaphor because we are servants of the Logos, the Word. The Word was with God, the Word was God, the Word became flesh. What we have here is the foundation for a theology of metaphor. We have distinction, we have identification, and we have incarnation. What else would a writer need?

So let’s suppose I have sold you. Wodehouse wrote about 90 books — where should you start?

Where to Start with Wodehouse

Virtually everything he writes is about the same general world, but there are recurring casts of characters within certain subsets of his books — numerous Jeeves books, numerous Blandings Castle books, and so on.

I think you would get a very solid grasp of what you might expect if you were to read four books. The links here are to editions being put out by The Overlook Press, folks who are engaged in the worthy task of re-releasing the entire Wodehouse collection in an affordable hardback collection. The first would of course be The Code of the Woosters — the most famous of all Wodehouse characters, Jeeves and Bertie Wooster, are found here. Another set of memorable characters is found in Galahad at Blandings, including the absent-minded Lord Emsworth. Leave It to Psmith is, in my view, one of his best. The P in Psmith is silent. And if you are not very adventurous, and want to stick close to the shore, you might want to start with Meet Mr. Mulliner, a representative collection of short stories.

So I really am happy to commend Wodehouse to you. If you pick up one of his books, and laugh out loud, you will be joining quite a band of other appreciative readers — Hilaire Belloc, Rudyard Kipling, C.S. Lewis, Evelyn Waugh — all of whom would be glad to share the laugh.